Snoop Dogg congratulated his daughter and her fiancé on their engagement and proudly referred to Wayne Deuce, Cori Broadus’ boyfriend, as his “son-in-law.”

Wayne and Cori had been dating for a while, and a couple of months ago, the rapper’s daughter called out detractors for making rude comments about their relationship.

When some claimed that Cori’s boyfriend was only dating her because she was Snoop’s daughter, that didn’t sit well with Cori.

Wayne has now silenced every one by placing a ring on his girlfriend’s finger.

On Friday, Snoop posted a photo of Cori, who was beaming broadly as she displayed her engagement ring.

According to the description of his Instagram image, the rapper appears to have already welcomed Wayne into the family. He wrote: “Congrats @princessbroadus baby girl U have been blessed @wayneduece Luv u son in law. God is merciful. Wayne tweeted a video of Cori’s diamond engagement ring alongside a photo of his “beautiful fiancee.” “Can’t wait to share my last name with you,” he added in the post.

Additionally, Snoop shared the proposal video, in which Wayne asks Cori to marry him before placing the ring on her finger. The Princess Has Found Her Prince, he captioned. Happy Birthday To My Heart

Also Read: What Do The Blue, Gray, and Gold Checkmarks Mean on Twitter?

The Choc Factory cosmetics and personal care line is co-owned by Cori and Wayne Deuce. The business even produces branded clothing.

Her fiancé is a gifted photographer who has taken some incredible pictures of Snoop’s daughter.

Wayne is referred to as the “creative director” of Wayne Wayne. coon Instagram, which features images of numerous models that he has captured.

Additionally, he received credit for the image of Cori that appeared on the cover of Essence magazine for the article in which she discussed using body acceptance to combat cyberbullying.

Also Read: Debunking the Rumor that Lionel Messi’s Wife, Antonela, Was Killed in A Car Crash.!

She Is Snoop Dogg’s Youngest Daughter

Cori is Snoop’s youngest child and was born in California. Cori shares her father’s passion for music. She made her debut in the reality television program Snoop Dogg‘s Father Hood, which aired on E! Additionally, Cori appears on her father’s CD, Reincarnated. She has made a name for herself as an independent musician over the years, and major streaming services like Spotify and Apple Music now provide her tracks for listening.

Shante Broadus, Snoop’s childhood girlfriend, and he have three kids together. Their second son, Cordell, was born in 1997, and their first son, Corde, was born in August 1994. Two years later, in 1999, Cori was born.

There Is Controversy Over Dream Works' New Animated Logo on Social Media.! 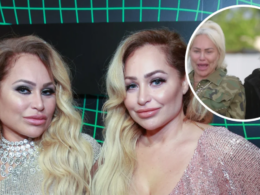