In light of the heartbreaking news that Stephen “tWitch” Boss passed away at the age of 40 examine his 2022 net worth.

On Wednesday, December 14, 2022, Allison Holker Boss, the renowned choreographer and actor’s wife, acknowledged her husband’s passing in a statement to People.

It is with the deepest sadness that I must share that my husband Stephen has left us, Allison said to the media outlet. Stephen brought light into every space he entered. Above all else, he treasured his family, friends, and community. He believed that the best way to lead was to lead with love and light. He served as the foundation of our family, was the best husband and father, and served as an example to his followers.

To say he left a legacy would be an understatement, and his positive influence will still be felt, she added. There won’t be a day that goes by that we don’t remember him, I’m positive of that. During this trying time for myself and especially for our three kids, we kindly request your privacy.

Stephen, we love you, we miss you, and I’ll always save the last dance for you, she said in closing

Stephen “tWitch” Boss’ net worth is estimated by Celebrity Net Worth to be $5 million as of 2022.

The source reports that for the first two seasons of The Ellen DeGeneres Show, tWitch was paid $500,000 every season. He reportedly earned $1 million per season after that, in addition to his role as co-presenter.

After participating in multiple seasons of the well-known dancing competition So You Think You Can Dance, the actor and dancer were given the DJ and presenting roles. The actor and performer made his film debut in 2006’s Blade of Glory and Hairspray, which were followed by a variety of television shows and motion pictures.

The TV shows Modern Family and Young & Hungry, as well as the films, Step Up 3D, Step Up Revolution, Step Up: All In, and Magic Mike XXL, all featured tWitch.

Allison Holker, 34, is a dancer, presenter, choreographer, and actress who is married to Stephen tWitch Boss. At a nearby club named The Dance Club, where she started her dancing career, she honed her tap, ballet, jazz, and contemporary dance skills.

In season two of So You Think You Can Dance, she participated as a participant. In season seven, when Allison and Stephen first met, she returned as an All-Star Dancer.

Together, they had three kids. Weslie, Allison’s child from a previous relationship who was born in May 2008, was adopted by the DJ. Maddox Laurel, a son, was the couple’s first child together. He was born in March 2016. In November 2019, their third child, a daughter called Zaia, was born, growing their family.

Following the loss of the well-known actor and performer, tributes have poured in.

No of the performance, he always made you grin as he danced. In a Twitter tribute, Antoine Johnson wrote, “You will be missed.

Another tribute read, “This is just awful.” Twitch was a lot more than just Ellen’s DJ, He gave countless others in the dance community and elsewhere enormous delight. Everyone who loved him, but especially his family, has my deepest sympathies. This is very awful, wrote another supporter. Much more than just “Ellen’s DJ,” he was. He had such skill. proves that you can never be certain of what is taking place behind the scenes. Goodbye, Twitch. 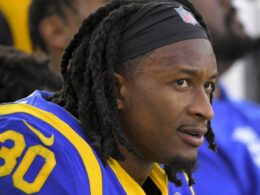