Following a Paris Fashion Week runway where his models wore “White Lives Matter” shirts, Kanye West has once again found himself at the center of controversy.

If the criticism from this wasn’t bad enough, West ratcheted up the pressure and attacked Gabriella Karefa-Johnson, a fashion journalist for Vogue, for calling his action “hugely reckless.”

Kara-Johnson was the subject of photos that West posted on social media, mocking her appearance. Later, Vogue issued a statement in which it stated that it “stands with Gabriella Karefa-Johnson.”

Kara-Johnson wasn’t the only person to criticize West’s designs, though that was to be expected. Diddy, better known as Puff Daddy, posted a video on Instagram where he discussed the matter. In keeping with his practice of posting screenshots of private chats online, West shared a conversation he had with Puff Daddy.

I’m not going to address everything that is happening in the world right now on the internet, but I do need to confront this white lives matter T-shirt, he added.

I’ve always stood by my brother Kanye and will continue to do so as a free thinker. But you know what I mean when I say that I don’t rock with the white lives matter T-shirt? I disagree with it.

“Before I can get to any other lives matter which all lives matter that Black Lives Matter, don’t play with it,” Diddy said, “because right now all America has planned for us is poverty, incarceration, and death.”

He warned his followers not to purchase the garment, wear it, or play with it because “it’s not a joke.” On October 7, West shared a screenshot of texts written to a person named “Puff” who was saved in his contacts, which was likely Puff Daddy.

He claimed that because nobody “gets in between me and my money,” he is “selling these tees” and that he didn’t like their chat. In addition, West warned Puff not to call him again until he had his approval to do so, promising “no bull**** like that again.”

God is Love, West captioned the picture. Although he misspoke to me, I still adore my brother.

But things didn’t end there. West tweeted a message that seemed to have been sent to him by Puff and said, “As soon as I land, we’ll meet in person!!!” Give me your address.

Puff Daddy left a “See you soon!” comment on the article.

Related: What Is Kanye West’s Net Worth? A glance at The Rapper and Founder of Yeezy’s Wealth

‘I TOLD YOU THIS WAS WAR,’ West tells Puff Diddy

The posts persisted, and the following one featured a note from Puff Diddy telling West to “stop playing these online games.”

In his answer, West once more stated that this was “not a game” and added, “I told you this was war. Now out to take care of some business.

Puff Diddy tells West, “I’m just trying to communicate to you as a black man, and I’m talking to you because this is harming our people. Stop.”

West responds, “I will post anything you text. I cherish you. And you guys are making me so, so sad. You’re welcome to apologize in advance.

Kanye West and Puff Diddy have both been contacted by GRV Media for a response.

When Does the Warriors' Contract with Draymond Green Expire? Has He Been Let Go? 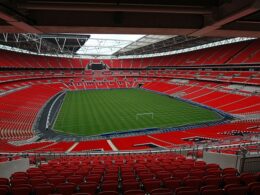