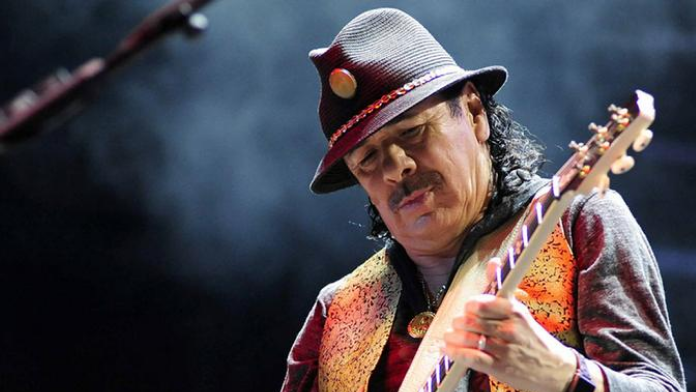 Carlos Santana is making a full recovery after collapsing on stage in Michigan on Tuesday night due to heat exhaustion. The 74-year-old renowned guitarist went away while performing on stage at Clarkston’s Pine Knob Music Theatre.

The guitar great was taken from his show at Pine Knob Music Theatre (formerly DTE Energy Music Theatre), an outdoor amphitheater in Clarkston, about 40 miles northwest of Detroit, Michigan,” a rep for Santana tells PEOPLE in a statement. “He was overtaken by heat exhaustion and dehydration during the show.” Carlos was taken to the emergency room at McLaren Clarkston for observation, and they continued, “Carlos is doing great.”The event at The Pavilion at Star Lake in Burgettstown, Pennsylvania that was initially set for that day has subsequently been postponed, according to Santana’s manager Michael Vrionis.

Roop Raj and Lori Pinson, both of FOX2 Detroit, took a picture that appears to show medical personnel encircling Santana on stage. Philip Lewis of the Huffington Post also shared a video of Santana being taken out while fans clapped for him on Twitter. Santana waves to the audience during the 10-second clip as he exits the stage.

#BREAKING: Carlos Santana just passed out on stage at ⁦@PineKnobMusic⁩. Medical personnel on stage. Crowd asked to pray for him because of a “serious medical” issue. Pic via ⁦@LoriPinsonFOX2⁩ pic.twitter.com/6VqHkBwVIT

Live tweeting from the concert, Billboard writer Gary Graff first reported that Santana had “just collapsed onstage” and was “being treated as I type.” Twenty minutes later, the guitarist has carried off the stage and brought to a hospital, according to a tweet from Graff.

At 10 p.m. local time, according to authorities, Santana was onstage with medical personnel. They asked fans to pray for Santana at the show.

According to former Detroit Free Press reporter Jo-Ann Barnas, even though the audience was asked to leave at 10:30 p.m., many people stayed because they were still in disbelief by the incident.

Santana was playing his song “Joy,” which features Chris Stapleton when he passed out, a concertgoer also claimed to The Detroit News. He was moving around and having fun when suddenly he collapsed, according to Janet Brown, a witness.

As part of his Miraculous Supernatural 2022 tour, Santana gave a concert there alongside Earth, Wind, and Fire, and other legendary musicians. His most recent studio album, Blessings, and Miracles was released last year, and the series of concerts is meant to promote it.

The health concern follows Santana’s “unscheduled cardiac treatment” in December of last year, which resulted in the cancellation of many of his Las Vegas performances.

In a video statement shared on Twitter, the Grammy winner addressed the issue head-on and informed followers that he underwent treatment as a result of chest problems.

Santana has canceled all December 2021 at the House of Blues Las Vegas as he recovers from an unscheduled heart procedure. We look forward to returning to perform at the House Of Blues in January 2022. pic.twitter.com/8cHcVDjFhv

In the video at the time, Santana remarked, “There have been rumors flying around here and there about this and that, so I’m here to just crystallize and make it plain.” “Last Saturday, I had an event when I requested that my wife Cindy drive me to the hospital since I was experiencing some sort of chest pain.”

He went on, “We discovered that I needed to take care of it when we arrived there. So I am and I will be taking a short break to make sure I refuel, rest, and catch up on my health so that when I play for you, I will play the way I normally play and give you everything I have.”

Santana informed his supporters, “I wouldn’t show up until I could do it. Before starting his tour in March, Santana performed at each of his rescheduled gigs in January, according to Variety.