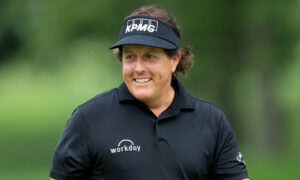 and one Open Championship (2013). [4] Mickelson became the oldest major championship winner in history when he won the 2021 PGA Championship at the age of 50 years, 11 months, and 7 days.

Mickelson is one of only 17 golfers in history to have won at least three of the four majors.

He has won every major except the U.S. Open, where he has finished runner-up six times in a row. 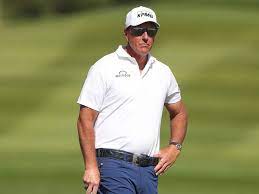 Mickelson has been ranked in the top 50 of the Official World Golf Ranking for more than 25 years. He has spent over 700 weeks in the top 10,[9] has a career-high world ranking of No. 2 several times, and is a PGA Tour life member. Despite being naturally right-handed, he is well-known for his left-handed swing, which he learned by imitating his right-handed father’s swing. [1] In 2012, he was inducted into the World Golf Hall of Fame.

The golf squabble between Phil Mickelson and Saudi Arabia .

In a recently leaked interview, golfer Phil Mickelson described Saudis as “scary.” The fallout revealed a schism in the golf community over a Saudi-funded league aimed at competing with the PGA Tour, which has been chastised for its treatment of players.

What happened: The Super Golf League, a proposed golf league backed by Saudi Arabia’s sovereign wealth fund, is at the center of the controversy. The league intends to compete with the PGA Tour, the dominant men’s golf competition in North America. LIV Golf Investments, a Saudi-funded company, is in charge of the Super Golf League.

Mickelson has been an outspoken supporter of the Saudi project, seeing it as a necessary alternative to the PGA Tour. In a recent interview with Golf Digest magazine, the golfer accused the PGA of “greed.” Mickelson is especially irritated that the PGA owns the rights to archival footage of golfers’ performances.

“They also have access to my shots, which I do not.” “They also charge companies to use shots I’ve hit,” Mickelson explained. 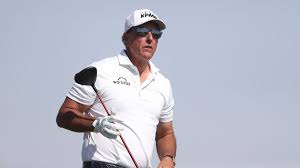 Mickelson’s criticism of the PGA Tour is not novel. He claimed last year that the PGA Tour only shares 26 percent of its revenue with the players, though the tour denied this.

Because of his status as one of the greatest golfers of all time, Mickelson’s support for the Saudi league has given it legitimacy. Last week, comments he made to author Alan Shipnuck, who is writing a biography of the golfer, landed him in hot water.

In reference to the league, Mickelson called the Saudis “scary” and acknowledged the Gulf kingdom’s human rights issues.

Mickelson went on to say that the Saudi league is the only way to get the PGA Tour to treat its players fairly.

“The Saudi money has finally provided us with that leverage,” he explained.

The comments sparked outrage in the golf world. Northern Irish golfer Rory McIlroy, who has spoken out against the Super Golf League, responded by calling Mickelson “naive, selfish, egotistical, and ignorant.”

Mickelson issued a lengthy apology on February 22. He stated that the remarks were “out of context” and were shared without his permission, but he also stated that he was “deeply sorry” for his choice of words.

Mickelson, on the other hand, appeared to stick by his criticism of the PGA Tour, saying that “golf desperately needs change.” He also praised LIV Golf Investments, stating that his interactions with the Saudi-backed company have been “very positive.” The statement made no specific mention of Saudi Arabia.

Despite some criticism of the country’s human rights record, Mickelson is far from the first prominent American to collaborate with Saudi Arabia. Both US Presidents Donald Trump and Joe Biden have notably declined to punish Saudi Crown Prince Mohammed bin Salman for his alleged role in the murder of Jamal Khashoggi, with Trump going so far as to publicly support the prince in the matter. Recently, Biden has defied calls to end US military cooperation with Saudi Arabia. Why it is significant: Saudi Arabia is now embroiled in a major controversy in American international golf. American golfers Dustin Johnson and Bryce DeChambeau, who had been linked to the Saudi league, announced on February 20 that they would remain on the PGA Tour.
Their decision was influenced by the leak of Mickelson’s remarks. The move is also a setback for Saudi Arabia’s reputation, which has suffered in recent years. In addition to the murder of Jamal Khashoggi, Saudi Arabia has been chastised for its role in Yemen’s civil war. Much of the criticism is directed at Prince Mohammed. The prince is also the chairman of the Saudi sovereign wealth fund, which is a sponsor of the Super Golf League.

For years, Norman has chastised the PGA Tour, particularly regarding financial transparency and restrictions on players competing in non-PGA Tour tournaments.

The Super Golf League appears to have already had an impact on the PGA Tour. According to reports, the league is offering some players more than $100 million to join. In response to the threat posed by Saudi money, the PGA Tour intends to hold tournaments with guaranteed prize money.

Unlike many other sports leagues, the PGA Tour does not provide players with guaranteed money. In response to the Saudi competition, the PGA Tour increased its prize money last year. LIV Golf Investments has not commented on the Mickelson controversy, and Al-attempts Monitor to contact the company were unsuccessful. Mickelson’s remarks were widely reported in Arabic online and on social media, with some outlets framing his apology as directed at Saudi Arabia.