How To Screenshot On Chromebook? [Complete Guide]

There are countless situations where a screenshot taken on a computer would come in handy. Everything from swiftly demonstrating a problem you’re fixing to gathering inspiration for a new undertaking to assisting a friend or family member by demonstrating a process is possible with the help of a video. However, the process of capturing a screenshot varies from system to system and device to device. Additionally, Chromebooks and ChromeOS are included.

For a long time, Chromebooks’ screenshot function was limited and inconvenient, requiring a keyboard shortcut that not everyone knew. Last year, though, Google released a screenshot tool for Chromebooks, making it possible to record still images and moving video of whatever’s on the screen. The Screen Capture application can be accessed in two different ways, and instructions on how to use it and locate your captured images are provided below.

Capturing The Display On A Chromebook By Pressing A Hotkey The three-key combination Shift+Ctrl+Show Windows brings up the Screen Capture toolbar. The Show Windows key, represented by an image of a window with two windows stacked behind it, can be found on the top row of a standard keyboard. The shortcut keys are used to bring up the toolbar from the screen’s bottom.

In addition, you can quickly capture the full screen, as opposed to just a selected area or window, by pressing Ctrl+Show Windows.

Each and every Chromebook can benefit from these keyboard shortcuts. There is, on the other hand, a Screen Capture key on the top row of the keyboard of some Chromebooks. To access the camera function, press the key shown as a camera (a rectangle with a circle in the middle). You don’t need to hit any other keys in order to use the tool; pressing this button will immediately activate it. 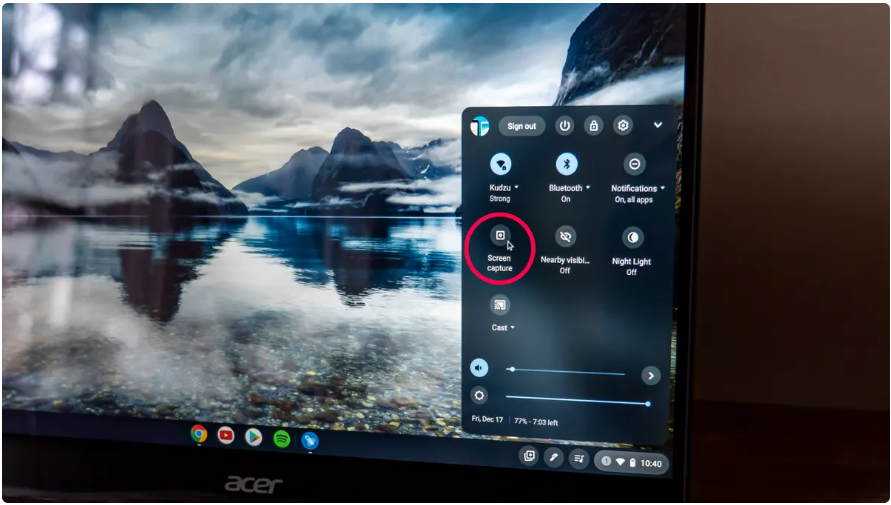 Shortcut keys are a pain to memorize, therefore I’m always seeking alternatives. Taking screenshots used to require me to memorize a combination of keys, but Google kindly included a dedicated button for it in the Quick Settings panel. To access Chrome’s Quick Settings, click the clock on the Shelf. Select “Screen Capture” using your device’s input method to open the toolbar.

Tutorial On Using The Screenshot Toolbar

The Screen Capture bar may record both screenshots and full-screen videos. The switch between taking pictures and recording video is located in the far left corner of the toolbar. Directly to the right of that switch are options to capture the entire screen, a custom region of the screen, or a particular window. They are suitable for both still and moving images. You can easily add voiceovers to your screenshots by clicking the gear icon in the toolbar while capturing your screen.

Where Do Chromebook Screenshots Get Stored? The Clipboard remembers the most recent five items you copied to it, making it easy to retrieve screenshots and recordings. Simply pressing the Everything key (also known as the Search key) with the letter V will bring up a list of options.

You can use the Tote compartment on the Shelf to store your Chromebook. All of your recent screenshots will be stored here. You can also pin files to Tote so that you always have that crucial screenshot at the ready without having to dig around for it.

If you want to access a screenshot that was previously copied to the Clipboard but is now gone, you can do so by browsing your files. The images folder in the Files app on your Chromebook houses your screenshots, while the Videos folder stores your screencasts.

Mint Mobile: Everything You Need To Know About Mint Mobile! [Complete Info.]

Top 10 Best Documentaries that Everyone Should Watch on Netflix Now! Which PC Cleaner Is Best For You Between IOLO.Com and ccleaner.Com?